Pete Seeger was sort of quoting King Solomon when he sang “A time for peace, I pray it’s not too late!” in the song “Turn turn turn” At the time the song became a number one hit in 1965, the unspoken reference was to the Vietnam war. Few of us as teenagers had read the verses from Ecclesiastes chapter three which had inspired the song, or thought much about what King Solomon was pointing out: 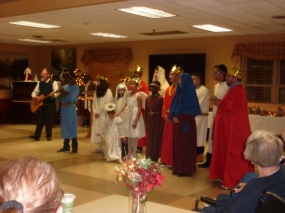 Even as Christmas approaches we also are faced with the continued threats of terrorism and war. Whether people are, dining out, going to the movies or even attending their weekly prayer meetings it seems that there is no place exempt from violence. But in these moments when everything seems to be closing in, we have to remind ourselves that Jesus never promised peace on earth, for now. In fact He guaranteed us that:

In the world you will have tribulation. But take heart; I have overcome the world.”    John 16:33

Because Jesus went to the cross, true peace is always possible – Thank God it is never too late! But peace is not the absence of war, though we would wish it so. Peace is the presence of the dove of peace ruling in our hearts no matter what comes.